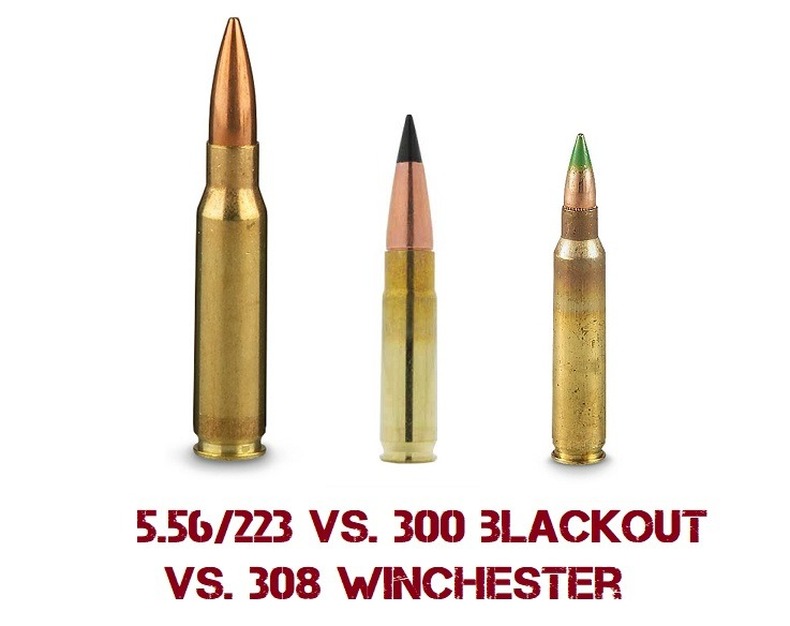 They’re all popular cartridges used in Modern Sporting Rifles these days, but there’s a whole lot more to the story. Here’s what you need to know about the 223/5.56 vs 300 Blackout vs 308 Winchester.

I think most shooters and hunters, but especially those who like using Modern Sporting Rifles, probably agree that the 5.56x45mm NATO, the .300 Blackout, and the .308 Winchester are all effective cartridges in certain situations. However, even though there is a small overlap in their capabilities, there are a some major differences between the 5.56 vs 300 Blackout vs 308 Winchester that you should be aware of.

Indeed, the cartridges represent three distinct ways of thinking: smaller, lighter, and faster for the .223/5.56 vs bigger, heavier, and slower for the .308 vs a middle of the road compromise with the .300 Blackout. This is part of the reason why those cartridges have dedicated followings and why there seems to be so many misunderstandings concerning their capabilities. Not surprisingly, the 5.56 vs 300 Blackout vs 308 Winchester debate can be really difficult to navigate.

In this article, I’m going to discuss the strengths and weaknesses on the 223/5.56 vs 300 Blackout vs 308 Winchester in order to provide some recommendations on which cartridge you should be using in various situations.

Before we get started, I have two administrative notes for you.

First, though the .223 Remington and the 5.56x45mm NATO are technically different cartridges (the same goes for the .308 Winchester and the 7.62x51mm NATO), the practical difference in performance between the .223 vs 5.56 (and the .308 vs 7.62) is very small and doesn’t make any difference for the purposes of this article and I’m going to use the cartridge names interchangeably. Use extreme caution when attempting to interchange the .223 Remington or .308 Winchester with their NATO cousins though.

For a more detailed discussion on the differences between the .223 Remington and 5.56x45mm NATO cartridges, read this article:

Second, some of the links below are affiliate links. This means I will earn a small commission (at no extra cost to you) if you make a purchase. This helps support the blog and allows me to continue to create free content that’s useful to hunters like yourself. Thanks for your support.

Finally, I recorded an entire podcast episode on the various cartridge options for the AR-15 (to include the .223 Remington, 5.56 NATO, and .300 Blackout). If you’d rather listen than read, click the appropriate link below to listen to this episode on your preferred podcasting service.

American military leaders started looking for a new rifle and cartridge in the years following World War II to replace the venerable M-1 Garand and the .30-06 Springfield. In particular, they were looking for a rifle similar to the German StG-44 or the Soviet AK-47 capable of fully automatic fire and with a detachable magazine. The Army eventually replaced the M-1 Garand with the M-14 rifle chambered in the new 7.62x51mm NATO cartridge.

If you’d like to read a more detailed discussion on how the .308 Winchester stacks up next to the .30-06 Springfield, read this article:

Winchester noticed serious commercial potential with the 7.62x51mm cartridge and introduced the extremely similar .308 Winchester cartridge for the civilian hunting and shooting markets around that same time.

American hunters and shooters loved the efficiency, power, and accuracy of the .308 Winchester. Soldiers and leaders in the American military appreciated those same characteristics in the 7.62x51mm and it has earned widespread approval for its performance in designated marksman/sniper rifles as well as machineguns.

On the other hand, many military leaders were not pleased with the M-14 as the primary infantry service rifle.

Just a few years after adopting the M-14, leaders in the military started looking for a lighter rifle and cartridge. They found what they wanted with the M-16 rifle and the high velocity 5.56x45mm cartridge.

While modifications to the rifle and the cartridge itself solved many of those reliability issues, many Soldiers and Marines who used the M-16 in combat during subsequent military actions complained about the poor stopping power of the 5.56x45mm cartridge (the M855 ball round in particular).

These issues led to the development of a series of larger caliber cartridges designed to function in modified AR-15 rifles like the 6.5 Grendel, 6.8 Remington SPC, .458 SOCOM and the .50 Beowulf during the 1990s and early 2000s.

Around the same time, leaders in the military started to look for a new cartridge that could reliably shoot .30 caliber bullets from an M-16 or M-4 rifle while still using a standard bolt and gas system. Additionally, they wanted a cartridge dimensionally similar enough to the 5.56x45mm that a standard M16/AR magazine could still hold 30 rounds of the new cartridge without any modifications.

Both of those loads offer performance that approaches the 7.62x39mm and .30-30 Winchester cartridges. If you’d like to learn more about how the .300 Blackout compares to them, read the article below:

At the same time, the .300 Blackout also functions reliably in a suppressed M16/M4 (as well as with the AR platform) when using subsonic loads like Sellier & Bellot’s subsonic ammunition shooting a 220 gr FMJ at 1,060 feet per second (549 foot pounds of energy) from a 16″ barrel.

The biggest difference between the cartridges is the size and weight of the bullets they fire: the .223 Remington uses .224″ bullets while the .300 Blackout and .308 Winchester use .308″ bullets.

The vast majority of .223 Remington factory loads shoot bullets in the 35-90 grain range. Of these, 55 grain and 62 grain bullet weights are by far the most common.

As you’d expect from the fact that the .300 Blackout was designed to use a standard AR-15/M16/M4 bolt, gas system, and magazine, the 5.56 and .300 Blackout cartridges are very similar in overall size and have the same case diameter. Though the .223 Remington cartridge below is slightly longer, both cartridges have the same SAAMI maximum overall length of 2.26″.

However, the .300 Blackout has a noticeably shorter case length than the .223 Remington (1.368″ vs 1.76″). That being said, the .308 Winchester absolutely dwarfs the other two cartridges with a much longer case length (2.015″) and overall length (2.81″). Even though the .308 Winchester and .300 Blackout have the same bullet diameter, they are otherwise vastly different cartridges.

Note: while the case capacity figures listed below do give a good indication of the differences between the two cartridges, exact case capacities vary slightly according to the brand of brass used.

As you can see, there is a really big difference in the trajectory and kinetic energy of each cartridge.

The table below compares how much a 10 mile per hour crosswind impacts the Barnes loads for each cartridge out to 500 yards.

Which one is right for you? Though the cartridges do have similarities, they are definitely on different ends of the performance spectrum. If you’re looking for a lightweight AR-15 then the 300 BLK is for you. There are a couple of proprietary 308 rifles that are almost the same size as a standard AR-15, but they’re specialized, more expensive and much heavier.

If you’re looking for the quietest suppressed performance, then the 300 BLK is for you. For those looking for a home-defense carbine, the 308 might be considered massive overkill. If you live on a large rural property and may need to defend beyond 300 yards, then the 308 is the better choice. The 308 is definitely the better choice of the two for long-range competitions.

The 308 also has significantly more power and range for hunting medium to large game. However, those who already own an AR-15 can change it to 300 BLK by simply sliding out the takedown pins and swapping upper halves. That quickly makes your AR-15 a 300 Blackout. The best decision of all is to get both!