The British had extensive evidence through their own experimentation with intermediate cartridges since 1945 and were on the point of adopting a .280-inch (7 mm) cartridge when the selection of the 7.62×51mm NATO was made. The FN company had also been involved in the development of the .280 round, including developing a version of the FN FAL in .280 The concerns about recoil and effectiveness were effectively overruled by the US within NATO, and the other NATO nations accepted that standardization was more important at the time than selection of the ideal cartridge 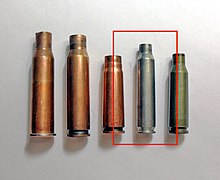 The development of the cartridge that eventually became the .223 Remington (from which 5.56mm NATO would eventually be developed) would be intrinsically linked to the development of a new lightweight combat rifle. The cartridge and rifle were developed as one unit by Fairchild Industries, Remington Arms, and several engineers working toward a goal developed by U.S. Continental Army Command (CONARC). Early development work began in 1957. A project to create a small-calibre, high-velocity (SCHV) firearm was created. Eugene Stoner of Armalite was invited to scale down the AR-10 (7.62mm) design. Winchester was also invited to participate. The parameters that were requested by CONARC:

5.56mm NATO shown alongside other cartridges and a United States $1 bill 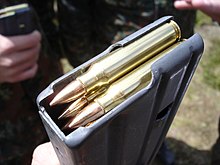 The 5.56×45mm NATO SS109/M855 cartridge (NATO: SS109; U.S.: M855) with standard 62 gr. lead core bullets with steel penetrator will penetrate about 38 to 51 cm (15 to 20 in) into soft tissue in ideal circumstances. As with all spitzer shaped projectiles, it is prone to yaw in soft tissue. However, at impact velocities above roughly 762 m/s (2,500 ft/s), it may yaw and then fragment at the cannelure (the crimping groove around the cylinder of the bullet)] These fragments can disperse through flesh and bone, inflicting additional internal injuries.

Fragmentation, if and when it occurs, imparts much greater damage to human tissue than bullet dimensions and velocities would suggest. This fragmentation effect is highly dependent on velocity, and therefore barrel length: short-barreled carbines generate less muzzle velocity and therefore lose wounding effectiveness at much shorter ranges than longer-barreled rifles.

Proponents of the hydrostatic shock theory contend that the shockwave from a high-velocity bullet results in wounding effects beyond the tissue directly crushed and torn by the bullet and fragments. However, others argue that tissue damage from hydrostatic shock is a myth. Critics argue that sonic pressure waves do not cause tissue disruption and that temporary cavity formation is the actual cause of tissue disruption mistakenly attributed to sonic pressure waves.

The Swedish military has measured the bullet velocities of SS109/M855 military cartridges at 4 m (13.1 ft) from the muzzle fired from differing barrel lengths.

There are no reviews yet.